Consumers are cashing in on the fear of the COVID-19 Pandemic Changes in marketing strategy, support of immunity mantra for earning | Companies introduced turmeric, ginger to immunity enhancer juice; Every third customer is buying an immunity product

Comments Off on Consumers are cashing in on the fear of the COVID-19 Pandemic Changes in marketing strategy, support of immunity mantra for earning | Companies introduced turmeric, ginger to immunity enhancer juice; Every third customer is buying an immunity product 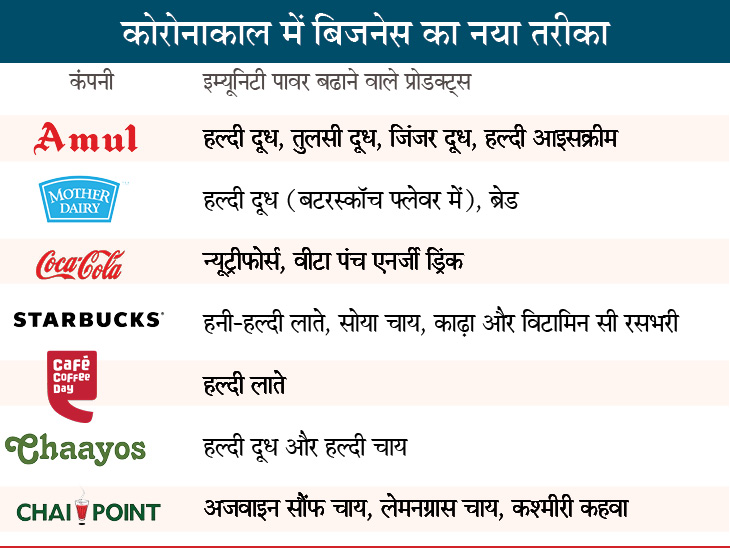 Corona cases may be growing, but companies have found an opportunity to earn in it. Every company is now bringing the products of immunity boosters. In this way, a new business segment is emerging, which can earn a significant amount even after Corona. However, during the Corona, the companies’ products are selling well. Actually, having strong immunity power is considered very important to fight infection. Fear of corona among people is such that their shopping patterns have seen a change.

According to a Nielsen report, every third customer on websites is buying immunity enhancing products. At the same time, the search for the word immunity on Google has increased by 500 percent. This fear of the people is capitalizing on the giants and making it a part of the marketing strategy.

Many companies including Mother Dairy, Amul India, Coca Cola have launched immunity products. Currently, turmeric milk, ginger milk, honey milk, herbal bread, immunity boosting juices, and food-borne food in restaurants have been included in its menu in the market. The companies that launch these products claim that these products increase immunity power and this helps in fighting diseases.

Dairy brand Amul India has launched turmeric milk, basil milk and ginger milk. Soon the company will also launch Ashwagandha and honey milk. Its price in the market has been kept at Rs 25. Recently, the company has also introduced turmeric ice cream in the market. Its 125 ml pack is priced at Rs 40. The company claims that in addition to turmeric, turmeric ice cream also contains black pepper, honey and dry fruits like dates, almonds and cashews.

At the time of product launch, Amul MD RS Sodhi had said that due to coronavirus, people are looking for products that increase disease resistance. In such a situation, keeping in mind the consumer, we have launched a product to boost immunity. Amul Immuno Chakra is going to offer ice cream in the coming days. This will include turmeric, ginger and basil.

Amul’s rival Mother Dairy recently launched its ‘immunity’ booster drink butter scotch flavored turmeric milk in view of the corona virus. The company claims that every bottle of turmeric, rich in its properties, gives the benefit of one spoon of turmeric in milk. Now the company has entered the bread business. The company has launched three varieties – Sandwich Bread, Brown Bread and Fruit and Milk Bread.

According to the company, it has used ingredients that increase immunity power. Its starting price is 15 rupees. This is part of the company’s strategy to diversify the business. Mother Dairy has set a target of increasing its revenue more than doubled to Rs 25,000 crore in the next 5 years.

Coca-Cola also on the path of Amul and Mother Dairy

Soft drink giant Brand Coca-Cola has launched ‘Minute Made Nutri Force’ and ‘Minute Made Vita Punch’ energy drinks on Tuesday. The company claims that these drinks cater to the needs of mental agility and immunity. It is prepared from fruits that increase immunity power. Coca-Cola India and South East Asia President T. Krishnakumar said during the launch that the company has launched fruit juice made keeping in mind the needs of the consumer.

Jain decoction has also come in the market

Similarly, Jain decoction is also available on Amazon. Jain Farms Fresh Foods has introduced Ayush Brew under the Valley Spice brand. It has ingredients like basil, dry ginger, black pepper, cinnamon. These are fully immunity booster products. The company said that this is under the guidelines of the Ministry of AYUSH. Jain Farms Fresh Foods is involved in processing the country’s leading spices.

Positive effects of Corona: Many products like turmeric, basil and ginger milk to special immune khichdi in the market, tea and coffee variants also launched to increase immunity.

After turmeric milk, Amul introduced basil and ginger milk, this product will be available in the market for 25 rupees

Take celery paratha and turmeric-ginger milk in the diet, do yoga like uttanasan to increase immunity: Expert

Use superfoods such as turmeric, ginger and mint; Make the kitchen a laughingstock and teach children the value of food