Comments Off on Good news for the unemployed: recruitment increased 14% in December, insurance sector leads the job 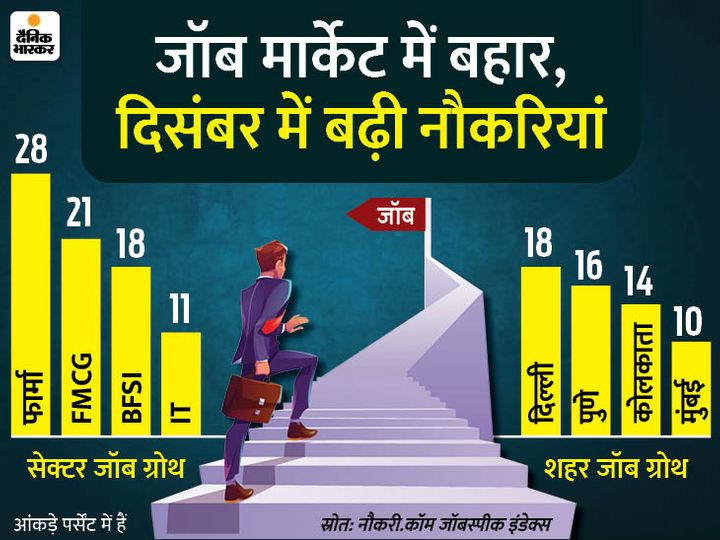 There are signs of improvement in the job market, which is good news for the unemployed. In the last month of the year of Kovid-19, 14% more people got jobs from November. This figure of jobs is weaker than in 2019, but the shortage is only 10%. This information is found in the job portal Naukri.com’s JobSpeak Index.

In the insurance sector Recruitment increased by 45%

According to the index, the insurance sector recruited more than 45% last month compared to November. Due to the increase in jobs in this sector, due to the epidemic, there was increased awareness about health and insurance among the people. In the case of recruitments, the auto and ancillary sector came second, with 33% more jobs. The reason for this was the purchase of vehicles and the goods to be carried at the end of the year. Apart from this, there were 28% more recruitment in Pharma and Biotech as compared to November, 21% in FMCG sector and 11% in IT software.

Recruitment fell 56% in the June quarter

“The hospitality, travel, auto and retail sectors are rebounding,” said Pawan Goyal, chief business officer, Naukri.com. The recruitment figures in December indicate a strong recovery in 2021. In the June quarter of the current financial year, recruitments were down 56% from the previous financial year but improved in the subsequent quarters. Recruitment in the December 2020 quarter was just 18% lower than the December quarter of 2019. In addition to IT, ITes and BPO, recruitments in the medical and pharma sector were also big.

The best part of the December hiring trend was that roll-out jobs like ticketing and travel saw a jump of 46% in December. In fact, in the industry like hotel / restaurant, which suffered the most due to Kovid-19, 13 percent more recruitments were made as compared to November last month. Recruitment was 27% in Teaching and Education role and 22% more in HR / Administration role. In the job market, last month, the demand grew by about 18%, with professionals with experience of 8 to 12 years and 13 to 16 years.

Unemployment in december 9.1 Percent, In april 23.52 Was percent

But unemployment among workers rose again and it reached the highest level since the introduction of unlocked phase in June. Unemployment stood at 9.1% in December, which was at a record high of 23.52% in April. According to the Center for Monitoring Indian Economy (CMIE), unemployment in November was just 6.5%. Actually, the laborers returned to the homes during the lockdown could not afford to farm, so they started returning to the cities.

Unemployment rate in the country reached above 27 percent in May, people working in unorganized sector suffered more

Premium of 24,383 crores: Life insurance industry premium reduced for the second consecutive month, a decrease of 3% in December

Due to Corona one crore people unemployed in 2 weeks in US, 66 lakh workers applied for unemployment allowance last week.