Record inflation in diesel-petrol: Petrol in Delhi Rs. 84.20 And diesel in Mumbai for Rs 81.07. Liter, here it is the highest price ever

Comments Off on Record inflation in diesel-petrol: Petrol in Delhi Rs. 84.20 And diesel in Mumbai for Rs 81.07. Liter, here it is the highest price ever 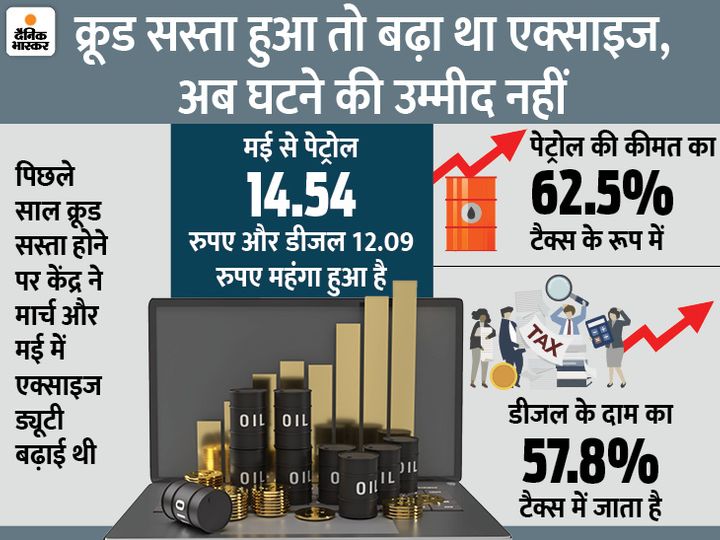 Diesel has also become costlier by 26 paise to 74.38 rupees in Delhi. However, it is not recorded. The record price of diesel in Delhi is Rs 75.45. This record was also made on 4 October 2018. Diesel has set a record in Mumbai. There, the price has increased 26 paise to 81.07 rupees.

Prices in other metros also reached near record levels

Petrol has become expensive in other metros of the country. Prices there have not reached record levels, but are around it. Petrol in Mumbai is 90.83 liters. This is 51 paise less than the record of Rs 91.34. This record was made on 4 October 2018. The price in Chennai is 86.96 rupees. This is 37 paise below the record of Rs 87.33.

Prices did not change for 29 days before Wednesday

When petrol and diesel prices reached record highs on 4 October 2018, the government reduced excise duty on them by Rs 1.50 per liter. Government oil companies also reduced the price by one rupee. But according to sources, the government is unlikely to reduce excise right now, given the lack of funds.

The government had increased excise by Rs 13 on petrol and Rs 15 on diesel.

Last year, when crude went below $ 20, the prices of petrol and diesel were not reduced. In two installments in March and May, the government increased excise duty on petrol by Rs 13 and on diesel by Rs 15 per liter. With this, the government was expected to get an additional Rs 1.6 lakh crore for the entire year. Petrol has been costlier by Rs 14.54 and diesel by Rs 12.09 since May.

Crude oil has become costlier by $ 5 a barrel

Petrol and diesel prices in the country are linked to the global market. Oil companies say they have had to increase prices due to crude oil being expensive. India imports Brent crude. It is priced around $ 55 per barrel. It has become expensive at $ 5 a barrel in a week.

Economic activity around the world nearly stopped last year due to the Corona epidemic. This reduced the demand for crude oil and prices had come down to below $ 20. In order to increase prices, OPEC and its partner countries decided to reduce production.

Center increases excise duty on petrol by Rs 10 and on diesel by Rs 13 per liter, no effect on retail price