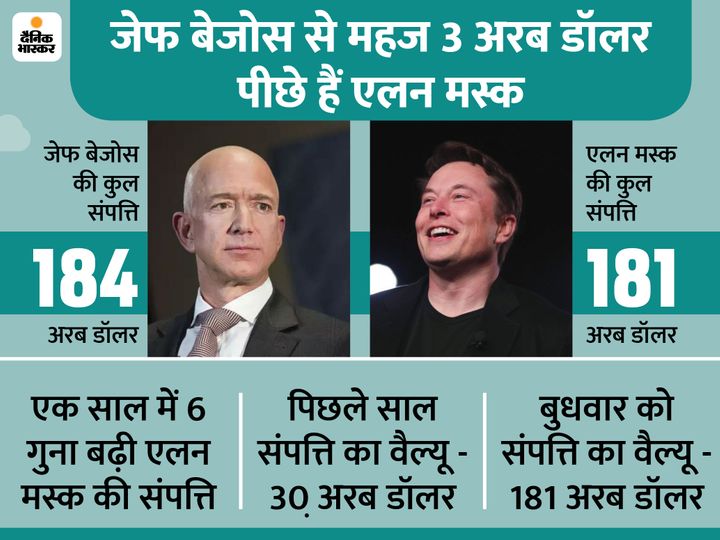 Musk’s net worth rose closer to Bezos after shares of electric carmaker Tesla jumped 2.8% on Wednesday

Musk’s net worth soared to Bezos’s after a 2.8 percent jump in shares of electric carmaker Tesla on Wednesday. Bezos has been the world’s richest person since October 2017.

Elon Musk owns 20 percent of Tesla’s shares. Apart from this, he got some shares through ESOP in 2012 and 2018, which is worth about 40 billion dollars now. Musk, however, has stated that he has no interest in money. He has no other assets other than stakes in Tesla and SpaceX.

Zhong Shanshan of China overtakes Warren Buffett to No. 6

Meanwhile, within six days of the new year, China’s Zhong Shanshan has overtaken Warren Buffett in terms of net worth. Now Shanshan is the 6th richest person in the world. A jump in shares of his bottled water selling company Nongfu Spring has increased his net worth by $ 15.2 billion. Last week, he became the richest person in Asia leaving behind India’s billionaire Mukesh Ambani.

These are the 15 richest people in the world

How long it took 11 of the world’s richest people to become billionaires | Bill Gates in 12 years, then Zuckerberg in 4 years became a billionaire; World’s richest businessman Jeff Bezos achieved this in 5 years

The richest person in the world: Elon Musk does not use WhatsApp; Video game was made at the age of 12