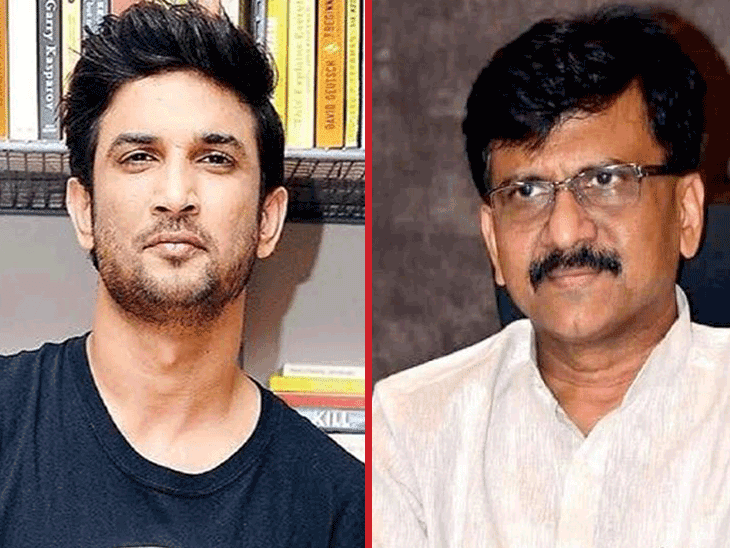 Sanjay Raut (right) had alleged that the relationship between Sushant Singh Rajput and his father was not good.

In the Sushant Suicide case, Shiv Sena Rajya Sabha MP Sanjay Raut has now targeted the Bihar government. He said on Monday- CBI lodged an FIR, it is his helplessness. CBI is a central government agency. The center has its own compulsion in such a case. The Bihar government has recommended a CBI probe even though they have nothing to do with it. What is your job in my organ?

Earlier, Raut had made several serious allegations against Sushant’s family in an article in the party mouthpiece Saamana. He had said that Sushant was upset due to his father KK Singh’s second marriage. Their relationship was not going well.

After this, Vikas Singh, advocate for Sushant’s father, said that I am very sad that Shiv Sena is saying this. Who knows Sushant or his father so closely in the Shiv Sena that he confessed that my family relationship was not good.

FIR is registered in Mumbai & is being investigated by Mumbai Police. Suddenly FIR is registered in Bihar. What’s the need for it? Have some trust in the Police. Every Police holds a reputation in its state, if you interfere in that then matter gets worse: Sanjay Raut, Shiv Sena https://t.co/PQdmXeC4nb

Family said- will claim defamation
On Raut’s statement, Sushant’s cousin and BJP MLA Neeraj Singh said that it was condemnable to make such a shameful allegation in a family matter. Sushant’s father had married only one. It is a stain on the family’s reputation. In a conversation with a newspaper, he has spoken about defamation case against Raut.

Shiv Sena MP #Sushant Singh Rajput Talking about family of
Every family has a story.
Shiv Sena people also have a lot.
But Sushant’s death is a sensitive subject.
The Shiv Sena should show sensitivity, not inferiority.#SushantDeathMystery

Raut angry over linking Sushant and Disha’s case
In the article ‘Saamana’, the cases of death of Sushant and his former manager Disha Salian were also criticized. The article said that the two cases are completely separate, but the leaders are linking them. A BJP leader is accused of raping Disha Salian. While doing this he would not have thought about Disha’s family.

Sonu Sood, who met the Chief Minister of Maharashtra after the Sena’s taunt, thanked him for help in relief work

Sushant Singh Case; Rhea Chakraborty Plea Supreme Court Hearing Today Latest News Updates | The Center approved the recommendation of the Government of Bihar; Hearing in the Supreme Court on Riya’s petition, the court said – the truth should come out

Sushant Singh Rajput Suicide Case: Patna SP Vinay Tiwari Talks About His Quarantine and Actor’s Death Case | SP Vinay Tiwari said – Bihar government is taking all my expenses, it would be good if release me in 2-3 days