Science of Caffeine: Caffeine from tea and coffee activates the brain, but also increases blood pressure, know its benefits and disadvantages.

Comments Off on Science of Caffeine: Caffeine from tea and coffee activates the brain, but also increases blood pressure, know its benefits and disadvantages. 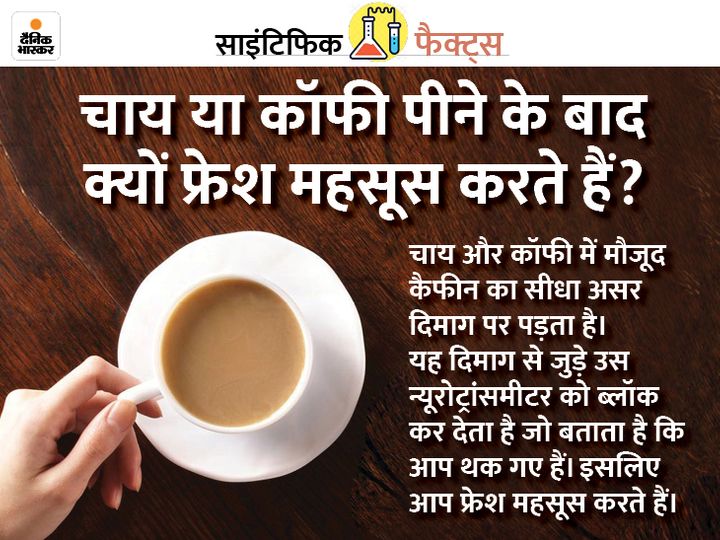 Feeling tired while working in the office. Suddenly you think and drink tea or coffee. After a few minutes, they start feeling fresh, but have ever wondered why this happens. The reason for this is the caffeine found in your tea and coffee. Eighty percent of the world’s population is consuming caffeine through tea or coffee. What is caffeine and how does it make your brain active, read the story…

What is caffeine
Caffeine is a steamulant found in tea, coffee, and cocoa plants. Through them it reaches the body. This directly affects the nervous system of the brain. You start feeling quite relaxed. The trend of caffeine beverages began in the 18th century, has increased from year to year.

How does Caffeine Work?
Whenever we take tea or coffee, the caffeine present in it gets mixed in the blood and spreads throughout the body. It affects the brain the most. Adenosine is a neurotransmitter associated with the brain. It tells you that you are tired. Caffeine blocks this neurotransmitter. In such a situation you do not feel tired and find yourself fresh.

Caffeine increases the activity of dopamine and adrenalin neurotransmitters. The result gets you excited. They find themselves very active and work by meditating.

How much caffeine in a drink

How much drink tea coffee
Dietician Surbhi Pareek says, caffeine benefits to some extent but when it reaches the body in large amounts, it starts doing harm. No more than 300 to 400 mg of caffeine should be taken during the day. To control the amount of caffeine in the body, do not drink more than 3 cups of tea throughout the day. One cup of coffee contains the equivalent of 3 cups of tea. So it is safe to drink a coffee throughout the day.

Now consider its advantages and disadvantages

When caffeine reaches the body, the appetite becomes less, hence weight loss. You feel very energetic physically and mentally, so you can do more work. Do not feel tired.

When its quantity is high in the body, it directly affects sleep. There is difficulty in falling asleep. Urine is released more from the body and there is lack of water. Increasing energy increases blood pressure, which can harm you in many ways. Therefore, it is better to take caffeine in moderation.

Science of winter: Blood pressure increases when temperature drops; Headache, heart attack and weight loss are the connection to cold

Diabetes and blood pressure are changing the structure of the brain; The result is that people’s ability to think and memory is decreasing

national nutrition week why oats is superfood and helpful for weight loss and reduce blood sugar and blood pressure | If you are struggling with heart disease or diabetes and want to lose weight, then include oats in the diet, understand the benefits from experts