What is the pest-spreading Congo fever that spread infection in Gujarat, Maharashtra had to issue an alert, if skin rashes, then get alerted

Comments Off on What is the pest-spreading Congo fever that spread infection in Gujarat, Maharashtra had to issue an alert, if skin rashes, then get alerted 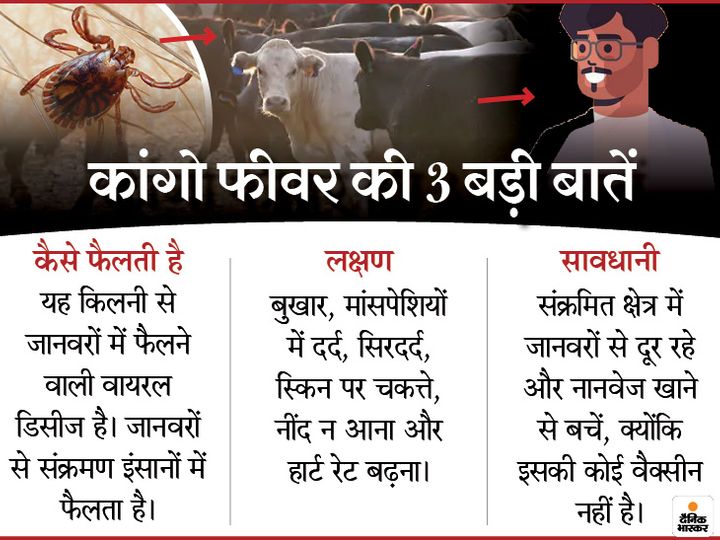 Q-1. What is Congo fever and when do you see its symptoms?

Q-2. Where did Congo Fever come from?
The first case of this disease came in 1944 in Crimea, Europe. But in 1956 cases of the same virus were reported in Congo, Africa, so the disease was named full of Crimean-Congo fever. Although colloquially it is called Congo Fever. Now its virus is reaching other countries as well.

Q-4. What is its treatment?
According to the World Health Organization, patients are given antiviral drugs when symptoms appear. It is treated both oral and intravenously. 30 percent of its patients die in the second week of illness. If the patient is recovering, then its effect is seen on the 9th-10th day.

No vaccine has been prepared so far. Avoidance of vaccine is the only cure.

2500 pigs die from African swine fever in Assam, this is the first case of the country, understand this disease with 5 questions

The risk of bubonic plague in Inner Mongolia province of China, this infection spread by mice is called ‘black death’

Infections spread from symptomatic patients without corona, not the reason for the spread of the virus worldwide

After recovery from corona, the woman began fever with neck pain, claims the treating doctor; This rare case of infection