Comments Off on In Corona Country: Central Government wrote letters to four states including Maharashtra and Bengal, said- Control your corona here

Health workers finalize preparations in Mumbai ahead of the nationwide dry run of the Corona vaccine on Friday.

Union Health Secretary Rajesh Bhushan has written letters to Maharashtra, Kerala, Chhattisgarh and West Bengal. He has asked these states to take steps to overcome the cases of Corona here. These states have not seen a permanent decline in the number of new cases in recent times.

It accounts for 59% of the country’s total active cases. Kerala has the highest number of cases at around 28.61%. This is followed by 22.79% in Maharashtra, 3.99% in Chhattisgarh and 3.89% in West Bengal. These states have been advised to take strict vigil and take steps to investigate the increasing cases.

Center told states – be prepared, will get the first batch of vaccine soon

The Union Health Ministry has asked the states and union territories to complete the preparations for the first consignment of the corona vaccine at the earliest. They will soon be delivered with the Corona vaccine. At the same time, to help them reach the states, the help of aircraft such as the Air Force Super Hercules C-130Js and Antonov AN-32s will be taken.

Supply will start in a day or two

Quoting government sources, the news agency said that Delhi and Karnal will be mini hubs for the northern region. Kolkata will be the hub for the eastern region, it will also be the nodal point for the northeast. At the same time, Chennai and Hyderabad have been selected for South India.

There was some increase in the number of corona patients in the country on Wednesday. 20 thousand 472 new patients were found, 19 thousand 689 were cured and 222 died.

This was the first time since 26 December that the number of new patients was more than those recovering. Also, the number of active cases, ie, patients undergoing treatment, has also increased by 547.

So far 1.04 crore people have been infected with corona in the country. 1 crore of these patients have been cured. 1.50 lakh patients have died and 2.25 lakh are undergoing treatment. These figures are taken from covid19india.org. 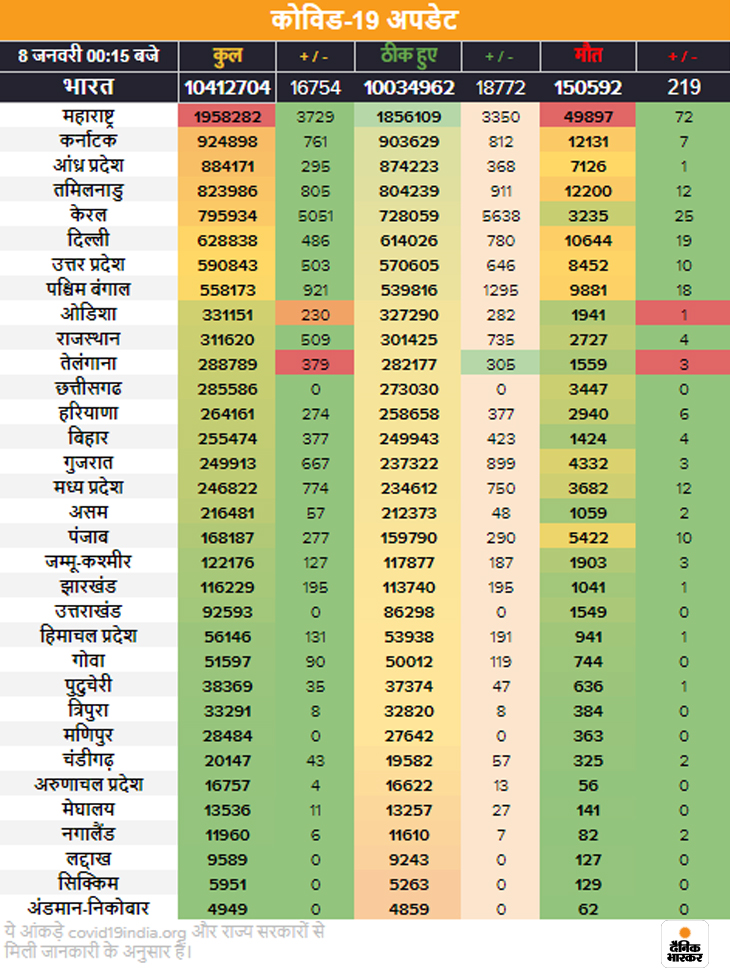 1. Delhi
654 people were found corona infected on Wednesday in the state. 719 people recovered and 16 died. So far 6 lakh 28 thousand 352 people have been infected. Of these, 6 lakh 13 thousand 246 people have been recovered, while 10 thousand 625 patients have died. There are 4481 patients who are undergoing treatment. 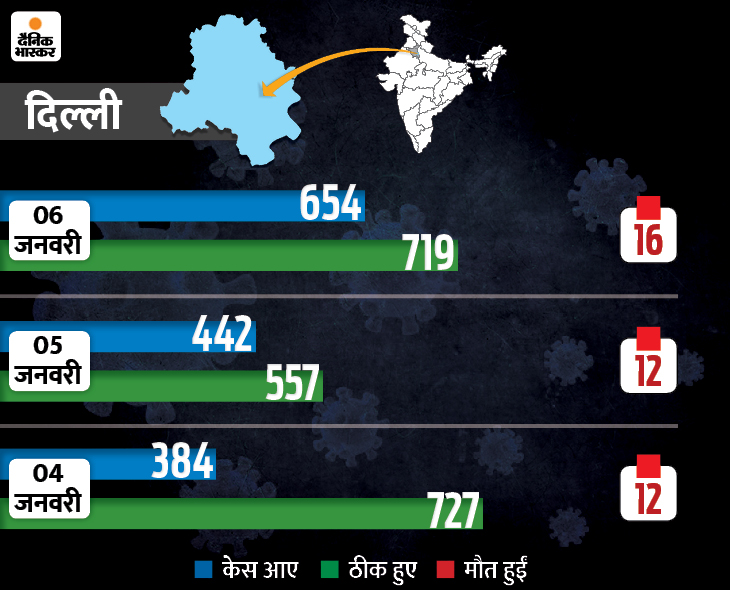 2. Madhya Pradesh
In the state, 730 people were found corona infected in the last 24 hours. 633 people recovered and 8 died. So far, 2 lakh 46 thousand 48 people have been infected. Of these, 2 lakh 33 thousand 862 people have been cured, while 3670 people have lost their lives. There are 8516 patients who are undergoing treatment. 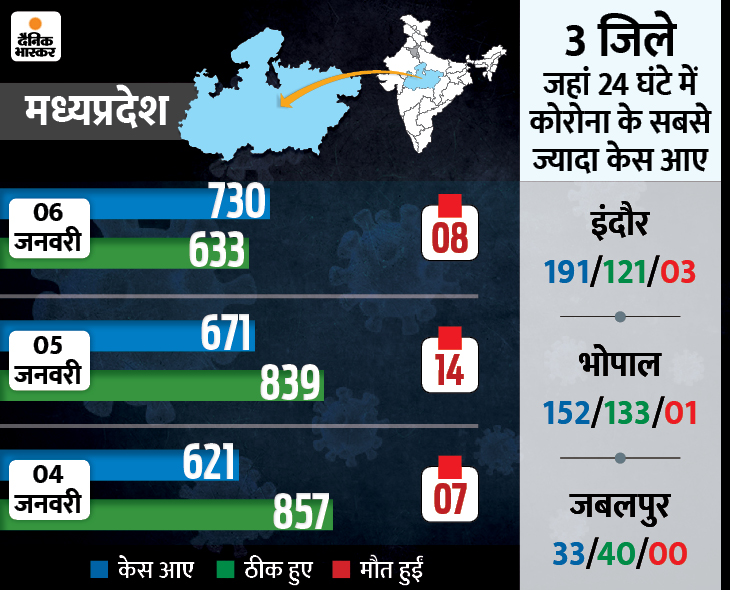 3. Gujarat
665 people were found corona infected in the state on Wednesday. 897 people recovered and 4 died. So far, 2 lakh 49 thousand 246 people have been infected. Of these, 2 lakh 36 thousand 323 people have been cured, while 4329 patients have died. There are 8594 patients who are undergoing treatment. 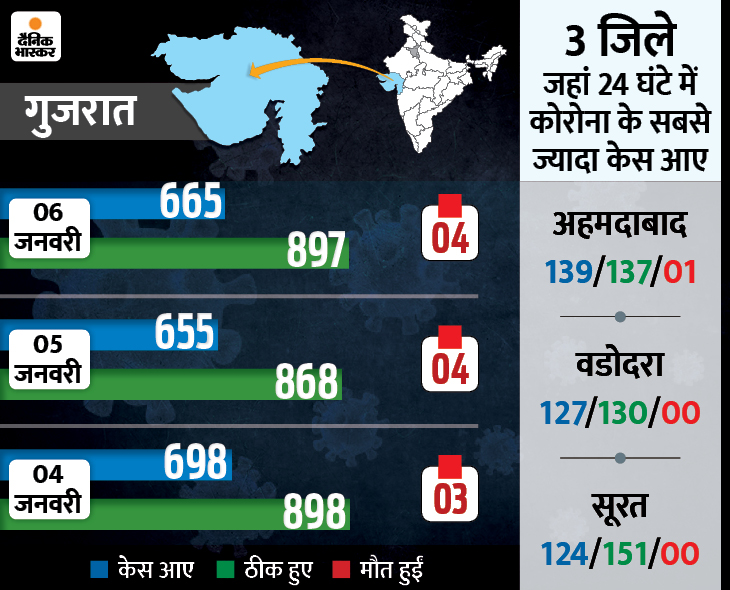 4. Rajasthan
On Wednesday, 436 people were found corona infected in the state. 564 people recovered and 4 died. So far, 3 lakh 11 thousand 111 people have been infected. Of these, 3 lakh 690 people have been cured, while 2723 patients have died. There are 7698 patients who are undergoing treatment. 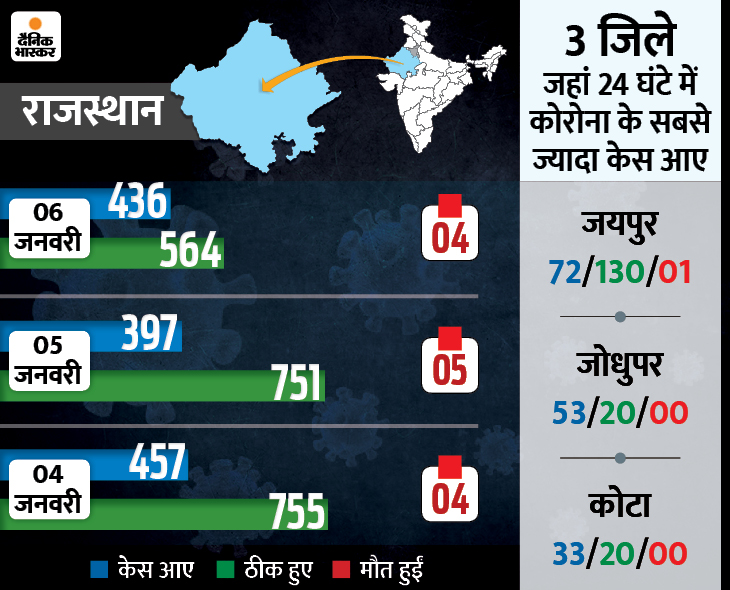 5. Maharashtra
The state received 4,382 new corona patients on Wednesday. 2570 people were recovered and 66 died. So far, 19 lakh 54 thousand 553 people have been infected. Of these, 18 lakh 52 thousand 759 people have been cured, while 49 thousand 825 patients have died. There are 50 thousand 808 patients who are undergoing treatment.

Corona in the country: Dry run of vaccination to be held in every district on January 8, important meeting of health ministers of states today

In Corona Country: Patients figure over 98 lakhs; 4 states including Maharashtra have more than 10% positivity rate