Comments Off on In Corona Country: Clinical trial of Sputnik-V vaccine begins in India; Public programs of leaders banned in Himachal 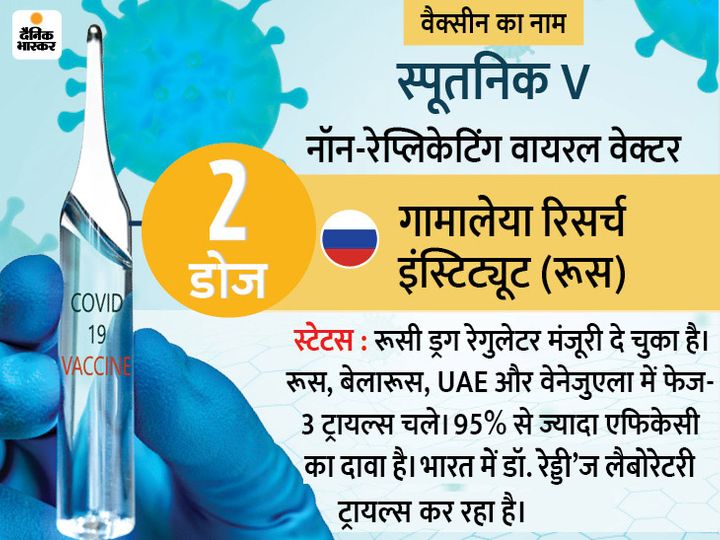 Clinical trial of Russia’s Corona Vaccine Sputnik-V (Phase-2/3 Combined) started in India from Tuesday. The Russian Direct Investment Fund and Dr. Reddy’s Laboratory Limited said that the trial has been started after getting all necessary approvals. The Russian-made vaccine has proved to be 95% effective in fighting corona during the Sputnik-V trial. This is revealed in the second preliminary analysis of the clinical trial. 28 days after the first dose, this vaccine showed 91.4% efficacy. The Russian body has tied up with Dr. Reddy’s Laboratory for its trial in India.

Winter season has been canceled for the first time in the history of Himachal due to increasing cases of corona. The session was to be held from December 7 to 11 at the Situation Assembly Complex in Tapavean, Dharamshala. The decision to cancel the session was taken at a cabinet meeting chaired by Chief Minister Jairam Thakur on Tuesday.

The cabinet has also banned the holding of public programs on all ministers, MPs, MLAs. Apart from this, permission of the concerned SDM will have to be taken for organizing any public event in the state. Not only this, if there are more than 50 people fixed in public event other than marriage, birthday, then the organizers will be fined five thousand rupees.

Delhi has the highest 31% population test, lowest in Madhya Pradesh is only 4.6%

The figure of those who lost their lives from Corona was 1.38 lakh
In the country, 431 people died due to infection on Tuesday. With this, the death toll has now increased to 1 lakh 38 thousand 90. Within the last 24 hours, 32 thousand 407 people were found infected. 38 thousand 355 people were recovered. So far, 94 lakh 95 thousand 661 people have been infected. Of these, 89 lakh 26 thousand 950 people have been cured, while 4 lakh 28 thousand 390 patients are undergoing treatment. These figures are taken from covid19india.org. 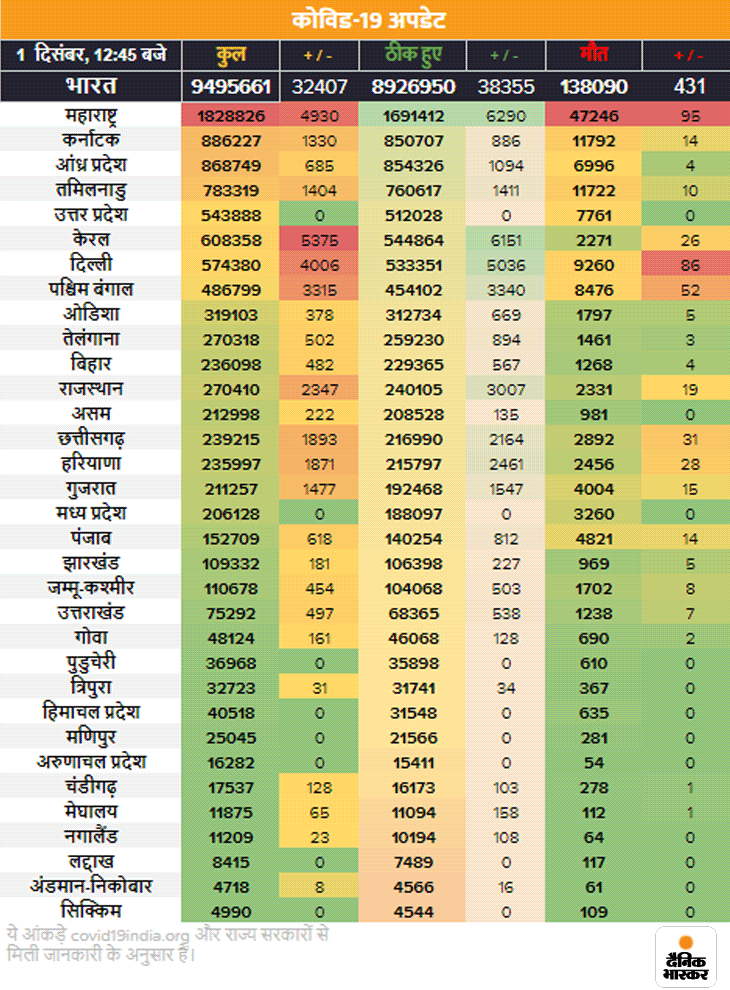 Most active case decreased after 14 days 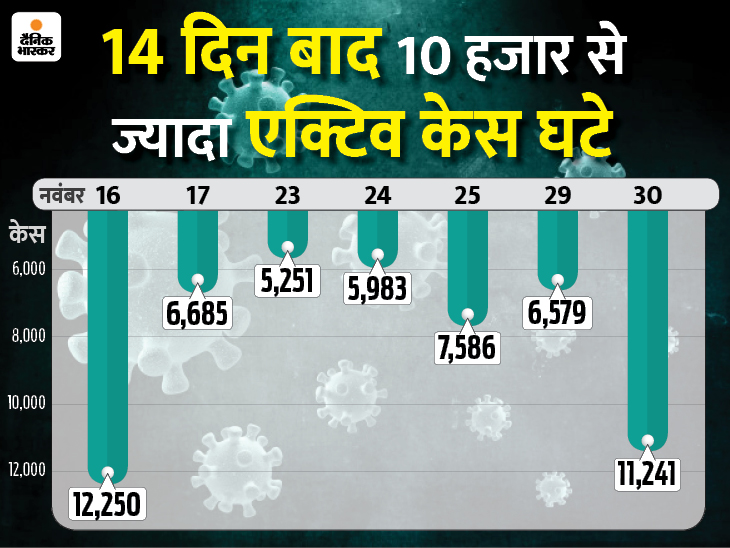 Cases increased since the day of night curfew in Bhopal
Night curfew has been imposed in Bhopal from 8 pm to 6 am from 21 November. Only exemptions and necessary work can be taken out, but cases have increased in place of incident. Since then, more than 300 cases are being reported every day, whereas before that the figure was less than 240. Not only this, the death toll of the infected has almost doubled after the imposition of the night curfew. On an average, one death occurred every day before the curfew, while this number increased to 2 on average after the curfew. – Read full news 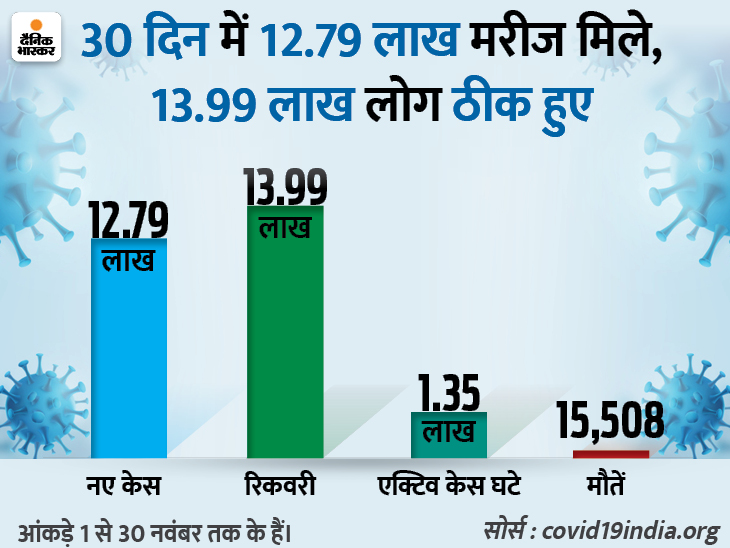 On Tuesday, 4006 new patients were found in the capital Delhi. 5036 people recovered and went to their homes from hospitals and 86 patients died. So far, 5 lakh 74 thousand 380 people have been infected in the state. Of these, 31 thousand 769 patients are being treated. 5 lakh 33 thousand 351 people have been cured. The number of people who lost their lives to infection has now reached 9260. 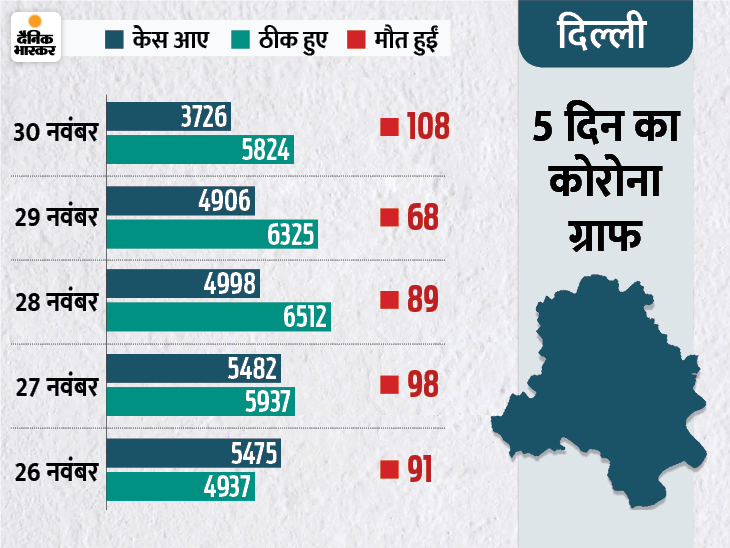 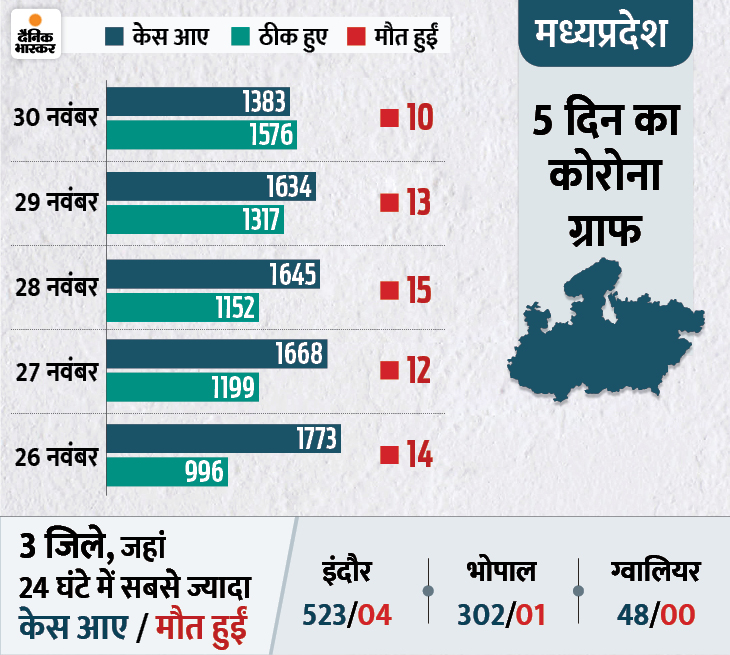 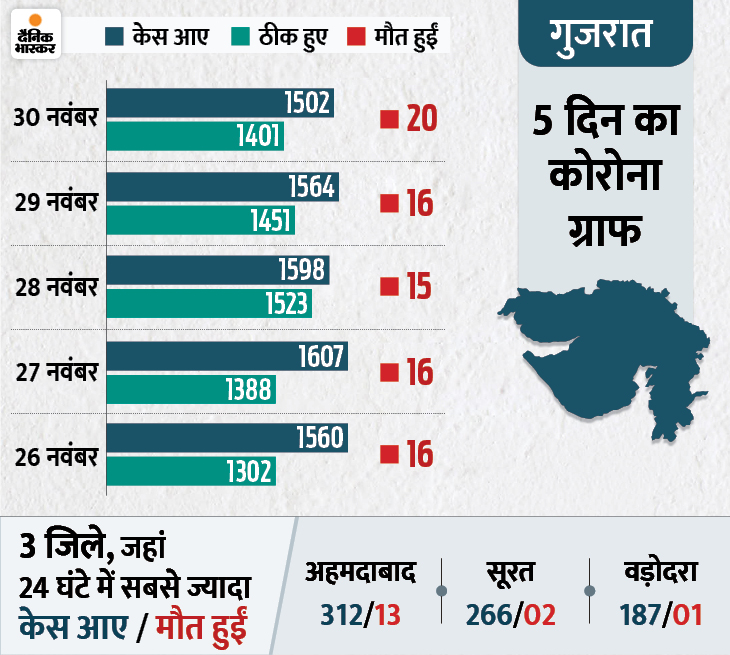 The state received 2347 new patients on Tuesday. 3007 people were recovered and 19 died. So far, 2 lakh 70 thousand 410 people have been infected. Of these, 27 thousand 974 patients are being treated, while 2 lakh 40 thousand 105 people have been cured. The number of people who lost their lives to infection has now increased to 2331. 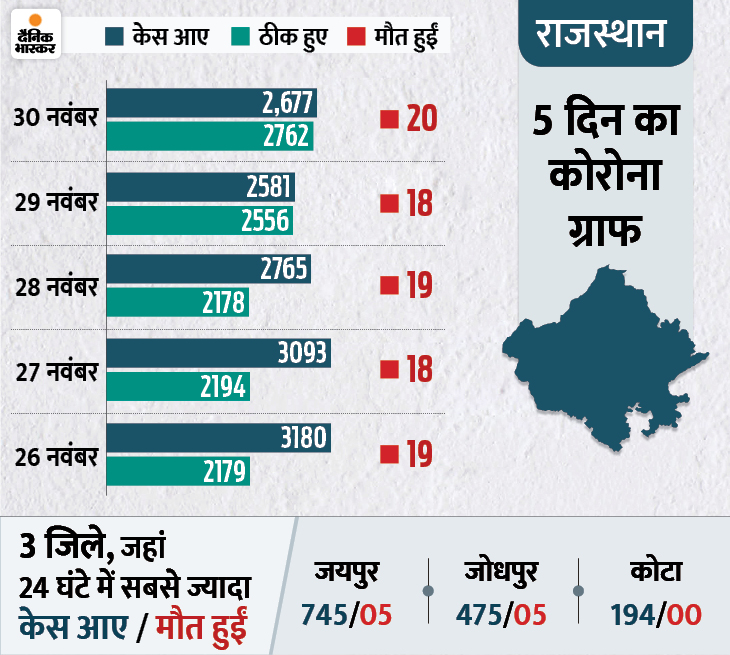 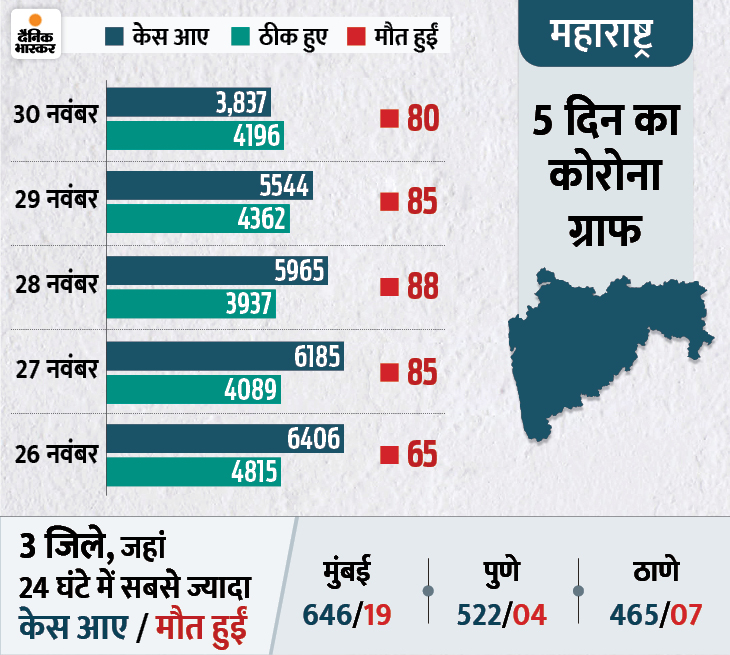 In Corona Country: More than 100 deaths in Delhi for the fifth consecutive day; Overall case of the country increased for the fourth time in 7 days

Corona in the country: 72 students of 12 schools in Haryana infected, state government said – now all schools will have corona test