In Corona Country: No curfew in Punjab from 1 January; Restrictions extended till 31 January in Maharashtra and Jammu and Kashmir

Comments Off on In Corona Country: No curfew in Punjab from 1 January; Restrictions extended till 31 January in Maharashtra and Jammu and Kashmir 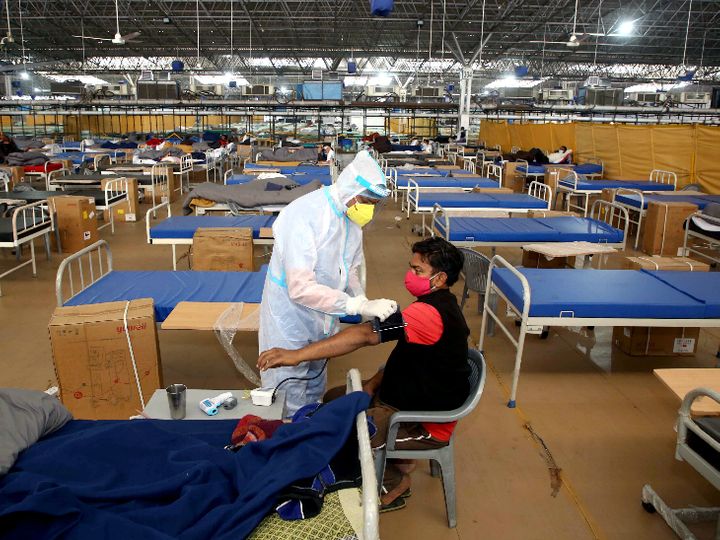 The Punjab government has decided to lift the night curfew in the state from 1 January. The biggest relief has been given to the hotel, the restaurant. Now 200 people can gather in indoor and 500 in outdoor. However, the restrictions will remain the same till 31 December. At the same time, it has been decided to extend the lockdown restrictions in Maharashtra and Jammu and Kashmir by 31 January. After increasing crowds in the new year and new strain cases in the country, the state government is taking special caution.

Local trains in Mumbai are not being fully operated under the lockdown restrictions in Maharashtra. Swimming pools are closed. The number of people who attend the wedding ceremony and other events is limited. A fine of 2000 rupees is being charged for not applying the mask. 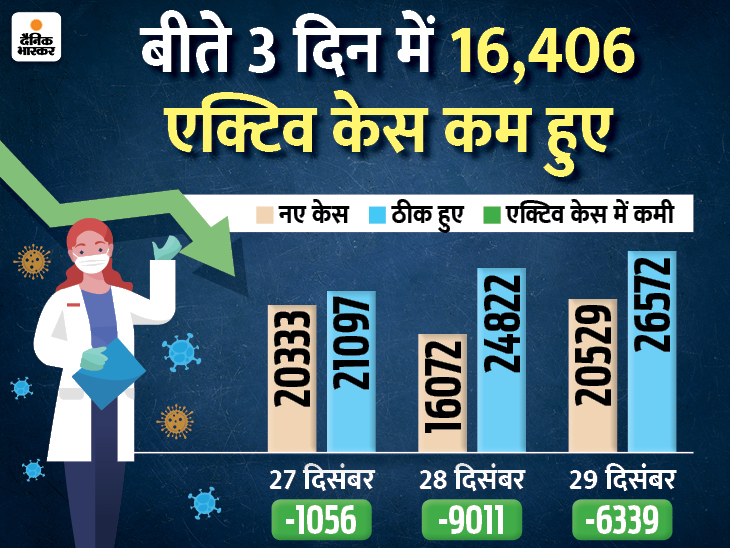 1.02 million infected so far
On Wednesday, 15 thousand 292 new cases of Corona arrived, 17 thousand 55 patients were cured and 185 died. In this way, 1953 active cases (patients undergoing treatment) were reduced. Now 2.58 lakh patients are being treated. A total of 1.02 crore cases have been reported so far. Of these, 98.50 lakh patients have been cured, 1.48 lakh infected have lost their lives. These figures are taken from covid19india.org. 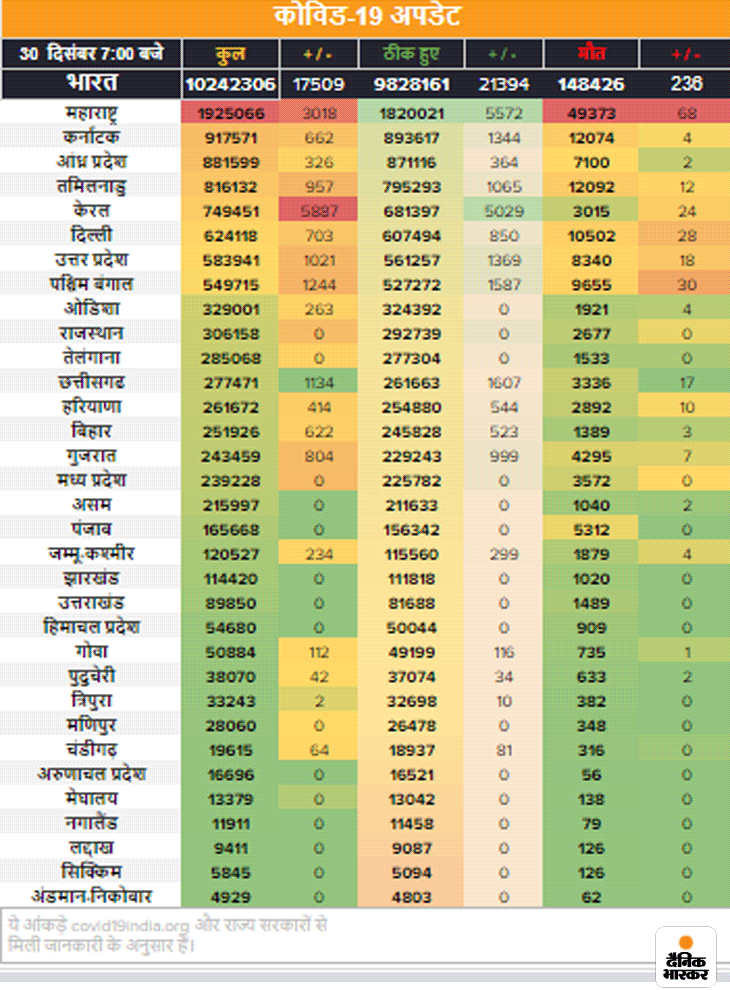 State of 5 states
1. Delhi
On Tuesday, 703 people were found corona infected. 850 people recovered and 28 died. So far, 6.24 lakh cases of infection have been reported. Of these, 6.07 lakh patients have been cured. 10 thousand 502 patients have died, while 6 thousand 122 patients are under treatment. 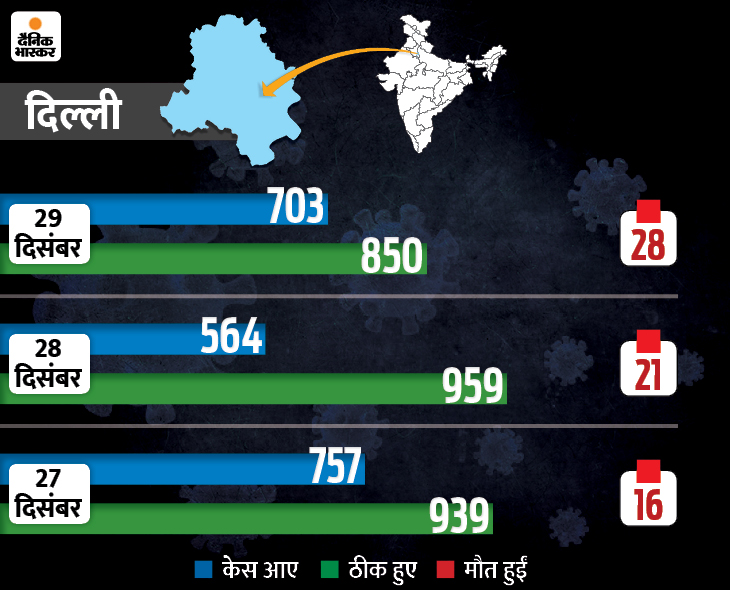 2. Madhya Pradesh
853 new infections were identified here on Tuesday. 1122 patients recovered and 10 died. So far 2.40 lakh cases of corona infection have been reported here. Of these, 2.26 lakh patients have been cured and 3582 have died. Now 9595 infected people are under treatment. 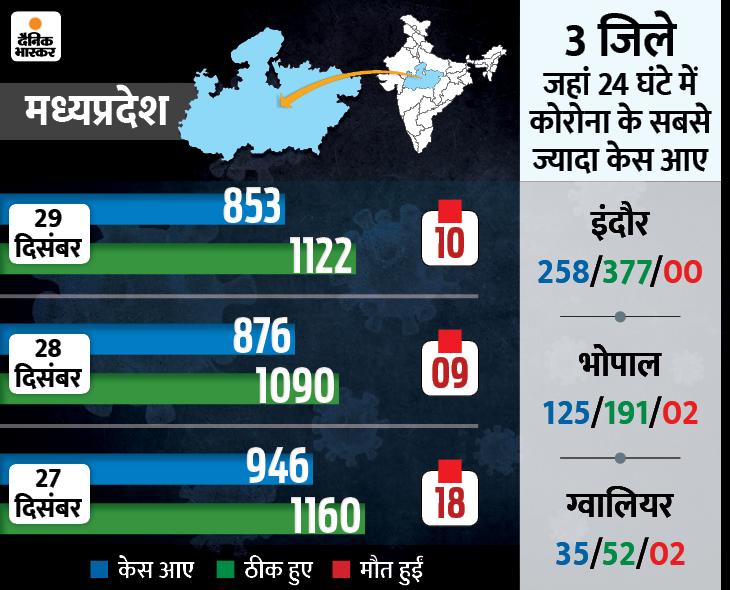 3. Gujarat
Corona report of 799 people came positive on Wednesday. 834 patients recovered and seven died. So far 2.44 lakh cases of infection have been reported. Of these, 2.30 lakh patients have been cured. 4302 have lost their lives, while 9879 are undergoing treatment. 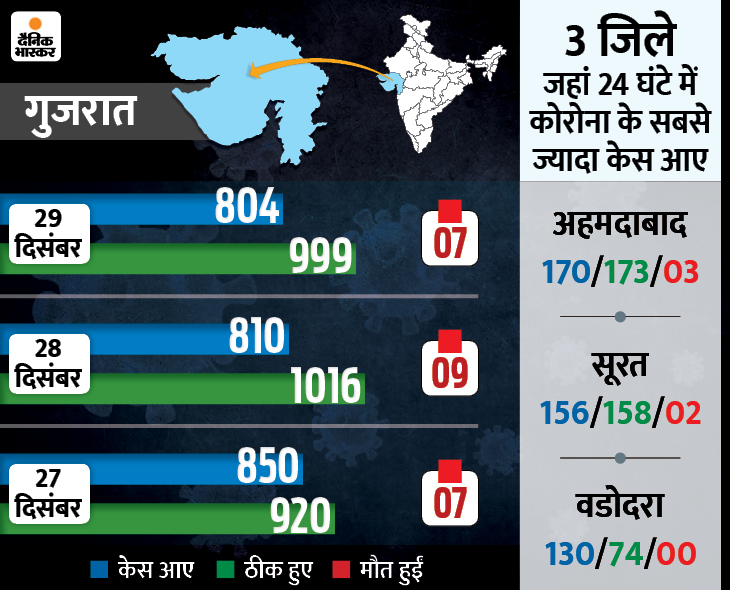 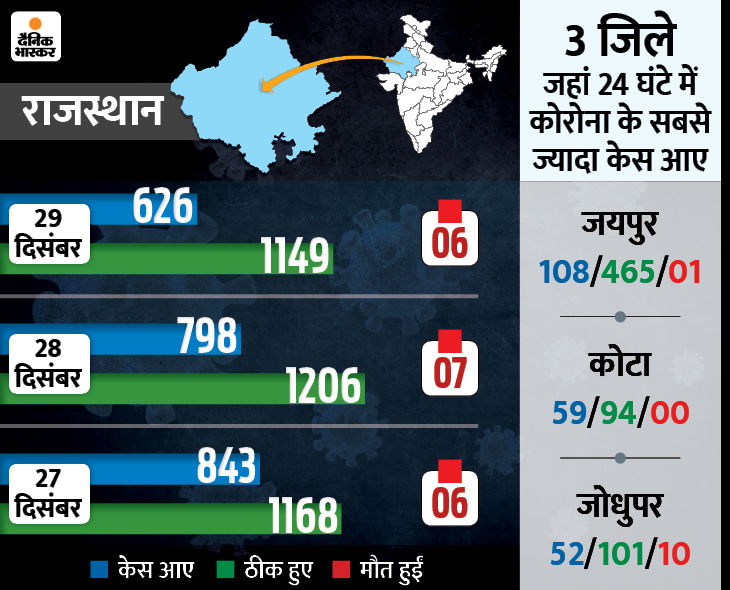 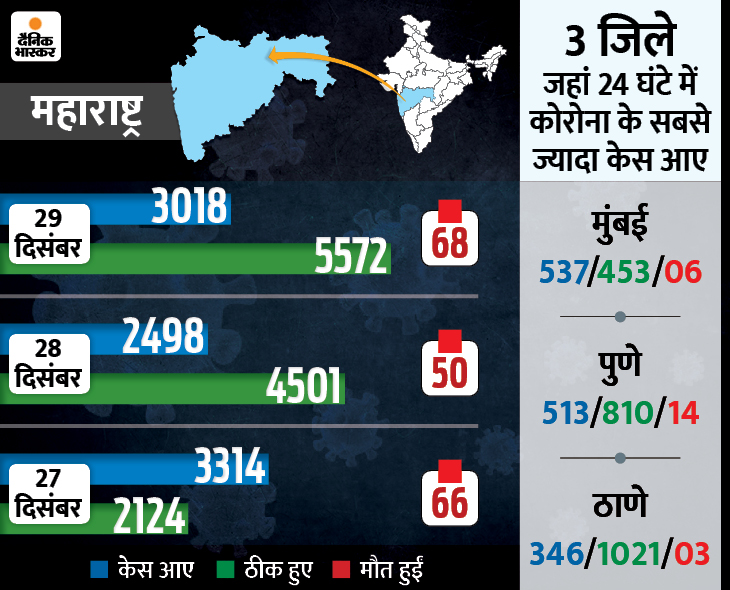 In Corona Country: Night curfew extended to 5 January in 4 districts of Himachal; 66 students and 5 staff member positive at IIT Madras

In Corona Country: Patients figure over 90 lakhs; Curfew will not be opened in Gujarat from 20 to 23 November in Ahmedabad