Comments Off on Patients crossed 79 million; Death rate less than 1% in 14 states and union territories

The number of corona patients in the country has crossed 79 lakh. So far 79 lakh 9 thousand 49 people have been infected. It is a matter of relief that 71 lakh 33 thousand 993 people have been cured in these, while 6 lakh 54 thousand 686 patients are still being treated.

So far, one lakh 19 thousand 30 patients have died due to infection. If you look at the figures, the deaths from corona in 14 states and union territories of the country are under control. It has a death rate of less than 1%. Punjab has the highest death rate of 3.14% and Maharashtra 2.63%.

Mizoram is the first state in the country where no deaths have occurred from Corona yet. So far 2,447 people have been infected here, but the government has controlled the infection to a great extent. 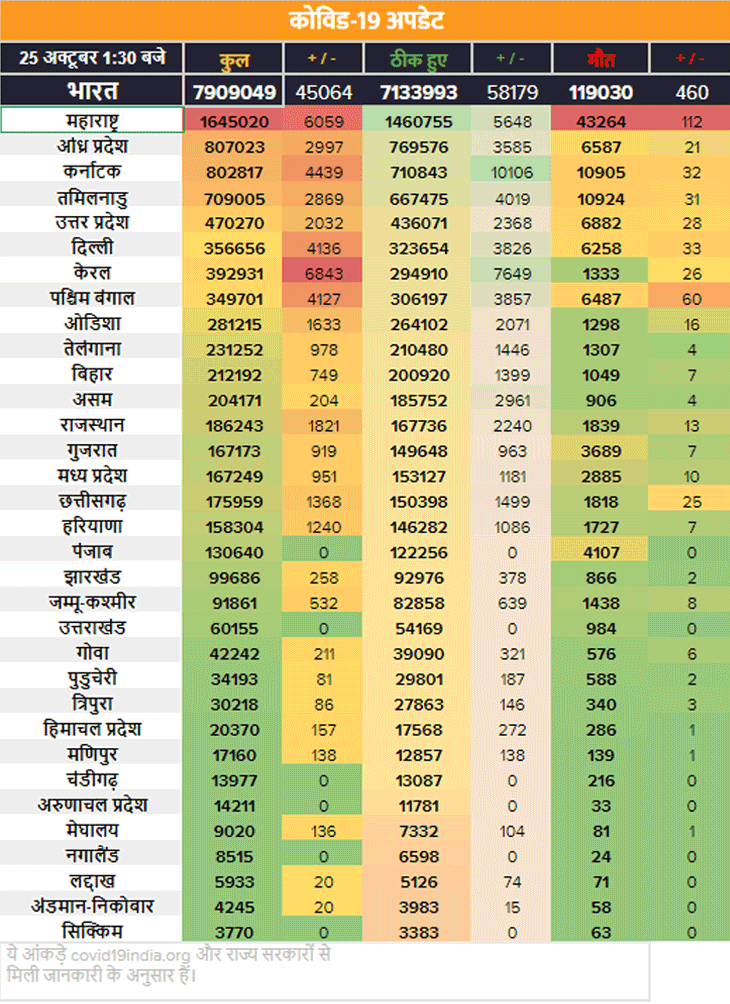 Reserve Bank of India (RBI) Governor Shaktikanta Das has become Corona positive. He tweeted, “I have been found corona infected. Am asymptomatic. Feeling completely healthy All those who come in contact with me are requested to take precautions. I will continue to work in home isolation. RBI work will be normal as before. I will be connected to all my deputy governors and other officials through video conferencing and telephone. ”

The number of patients being treated for corona has now increased to 6.68 lakh. When compared to the last two weeks, this time 70 thousand less patients were found. Between 11 and 17 October, where 3 lakh 71 thousand 163 cases were received, between 18 and 24 October this number was 4 lakh 41 thousand 217. This week 4 lakh 81 thousand 324 patients were cured, this number is 38 thousand 210 less than the week before.

On Sunday, 951 new patients were found in the state, 1181 people were cured and 10 patients died. The number of infected people has now reached 1 lakh 67 thousand 249. Of these, 11 thousand 237 patients are currently being treated, while 1 lakh 53 thousand 127 people have been cured. So far 2885 patients have died due to infection. 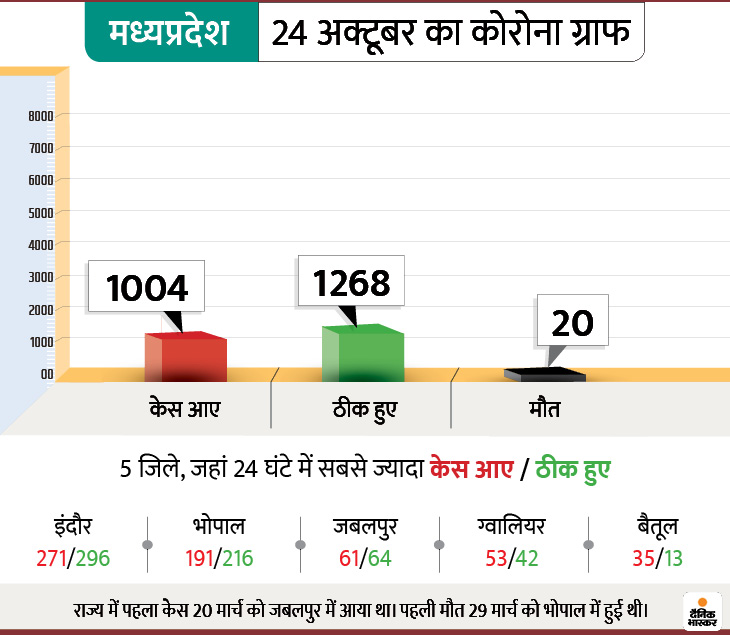 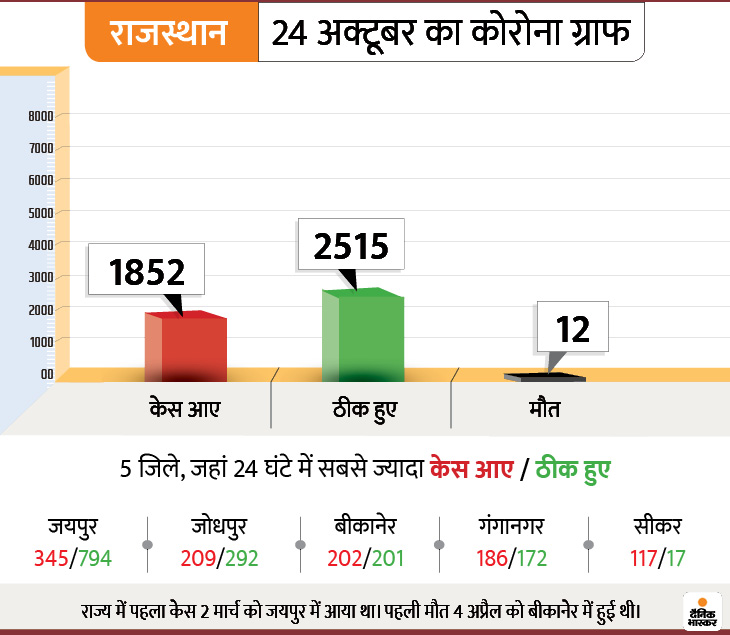 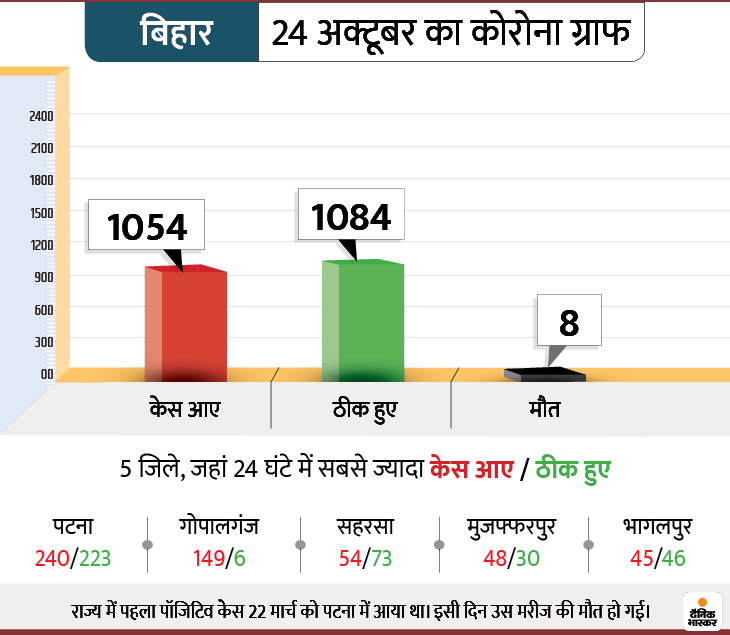 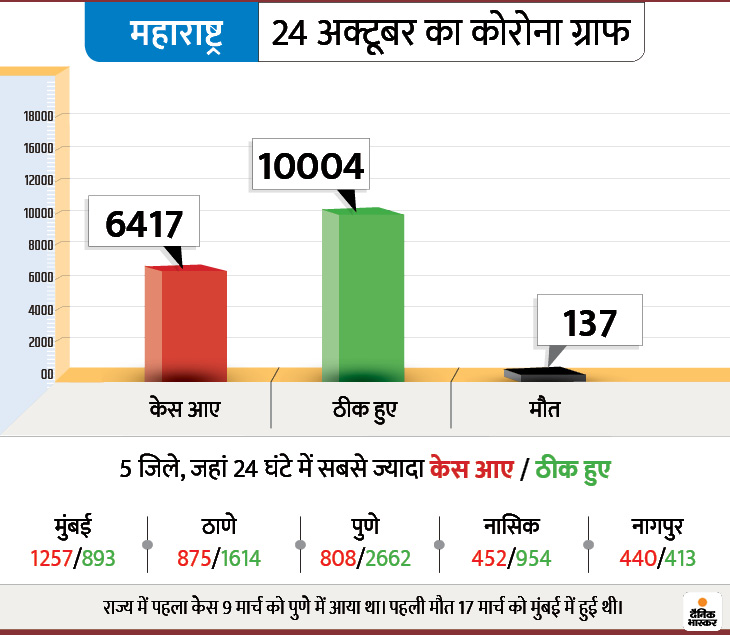 5. Uttar Pradesh
The number of people who lost their lives due to Corona in the state has reached 6882. On Sunday, 28 infected died. 2032 new patients were found and 2368 people recovered. So far, 4 lakh 70 thousand 270 have been confirmed infected. Of these, 27 thousand 317 patients are currently being treated, while 4 lakh 36 thousand 71 people have been cured. 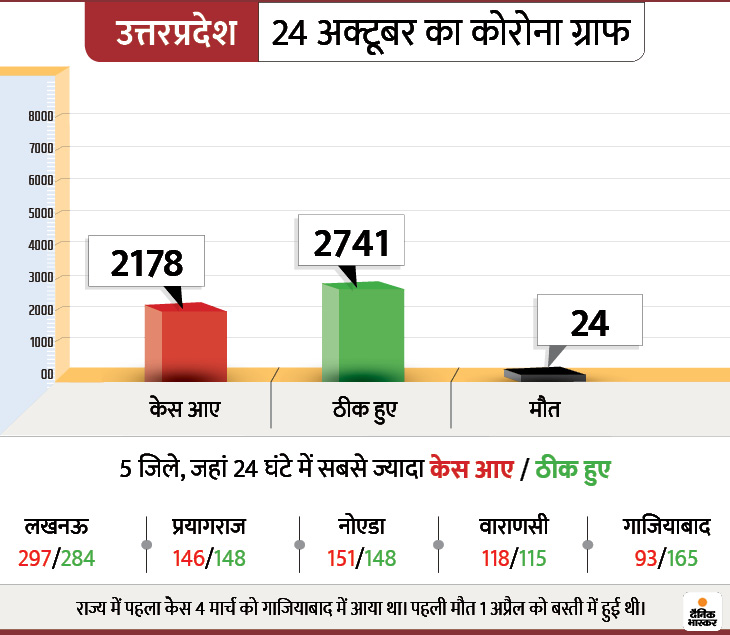 Patients figure 77 lakhs; Of these, 68.71 lakh were cured, more than 85% recovery rate in top-5 infected states