Patients figure 77 lakhs; Of these, 68.71 lakh were cured, more than 85% recovery rate in top-5 infected states

Comments Off on Patients figure 77 lakhs; Of these, 68.71 lakh were cured, more than 85% recovery rate in top-5 infected states 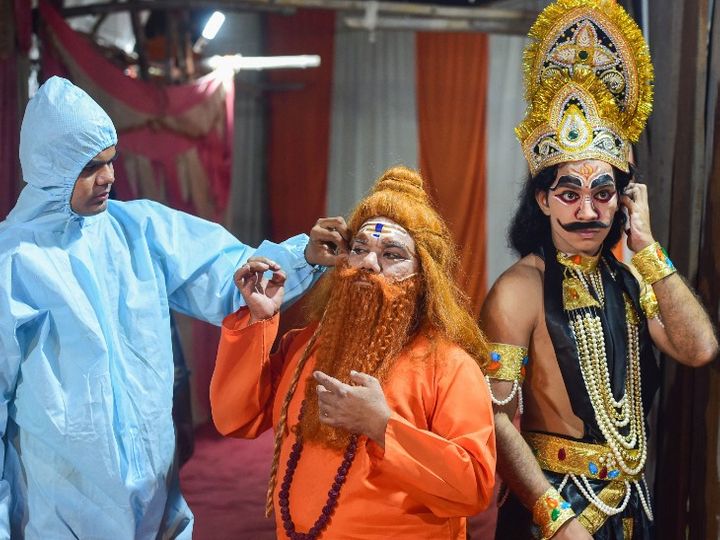 The photo is from Delhi. Here the makeup artist is dressed in a PPE kit for the actors to stage Ramleela. So far, over 3.40 lakh people have been infected in Delhi.

ICMR has approved the Kovidrap test kit prepared by IIT Kharagpur. It costs Rs 500. This kit will give results in one hour. IIT Kharagpur director Professor V.K. “This is arguably one of the most important contributions in the history of medical science, especially in the field of virology. It is also set to replace a large-scale RT-PCR-based test,” Tiwari said. 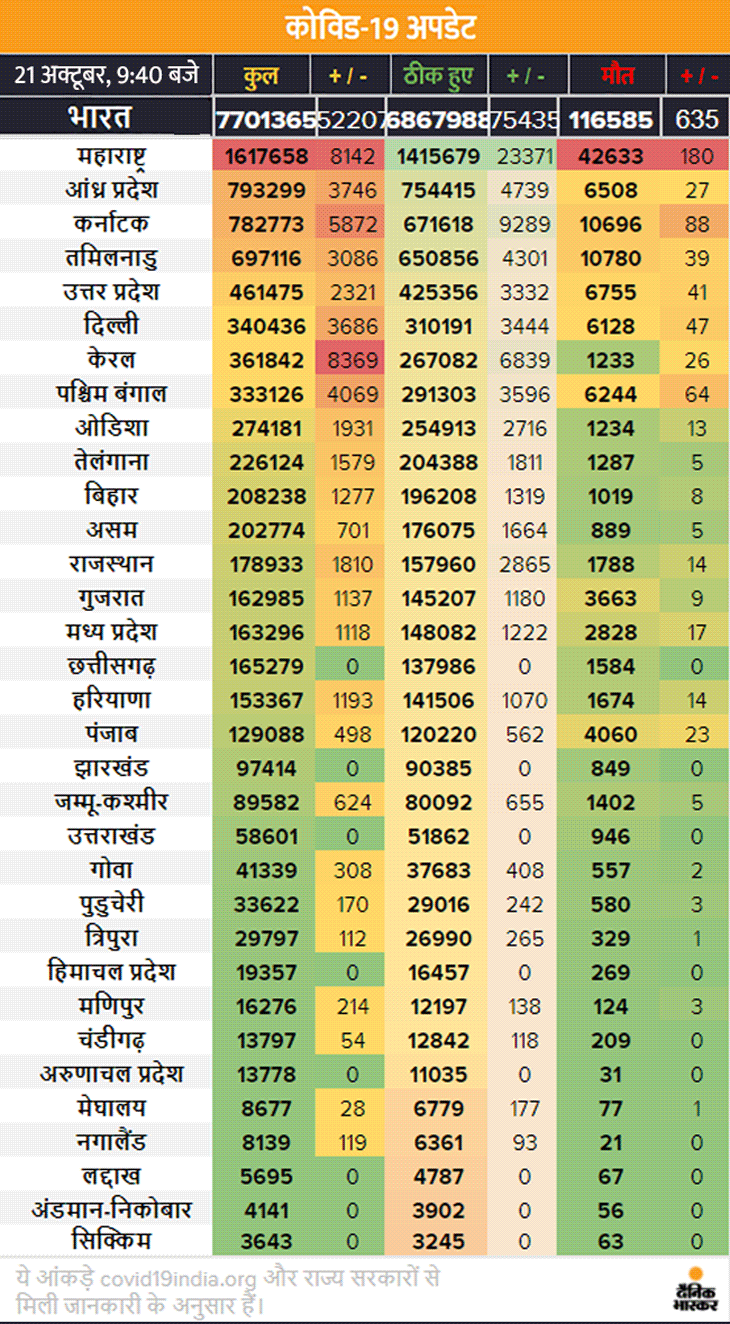 For the third consecutive day, the number of active cases was less than 7.5 lakhs.

It is good for all of us that new cases of infection are decreasing. Active cases (patients who are undergoing treatment) have also started decreasing rapidly. In the month and a half, the number of active patients decreased by more than 2 lakhs. The number of active cases remained less than 7.5 lakh for the third consecutive day. According to the Union Health Ministry, 64% of active cases in the country are in only 6 states. 50% of these are in Maharashtra, Karnataka and Kerala. The rest are in other states. 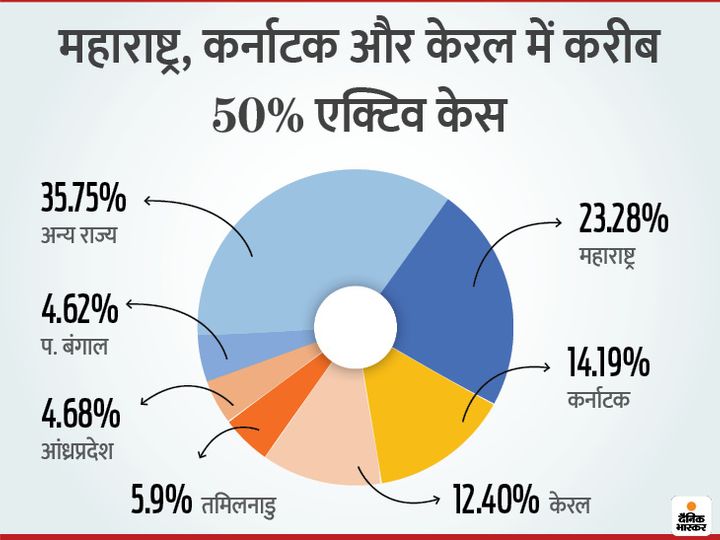 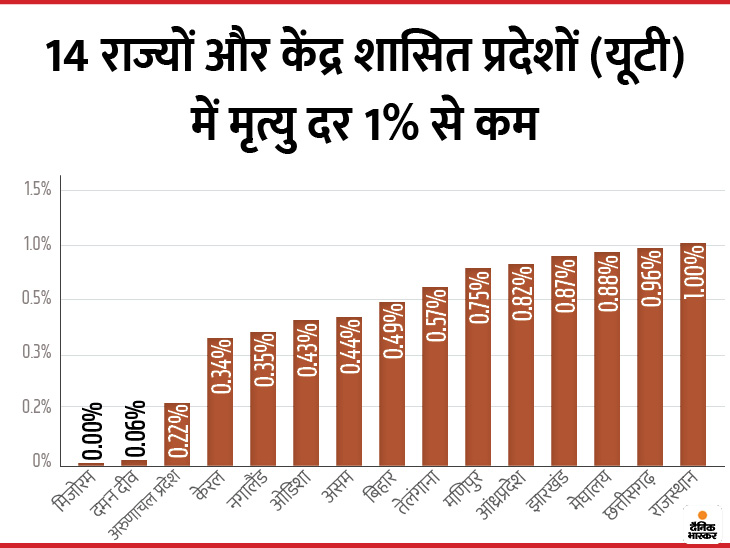 In the last 24 hours, 1118 new patients were found in the state and 1222 people were recovered. 17 infected died. So far 1 lakh 63 thousand 296 people have become corona positive. Of these, 12 thousand 386 patients are being treated, while 1 lakh 48 thousand 82 people have been cured. 2828 patients have died due to infection. 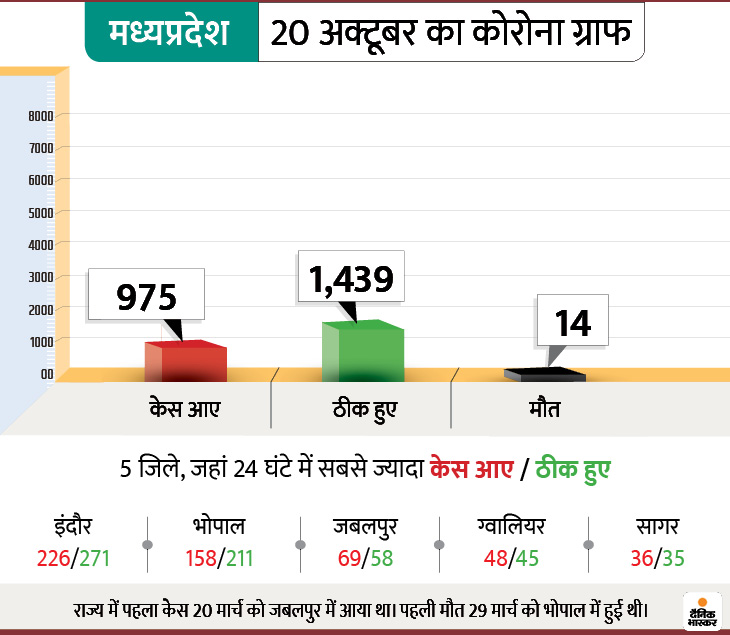 The state received 1810 cases on Wednesday, 2865 people recovered and 14 patients died. So far, 1 lakh 78 thousand 933 people have been found infected in the state. Of these, 19 thousand 185 patients are still being treated, while 1 lakh 57 thousand 960 people have been cured. 1788 infected have lost their lives so far. 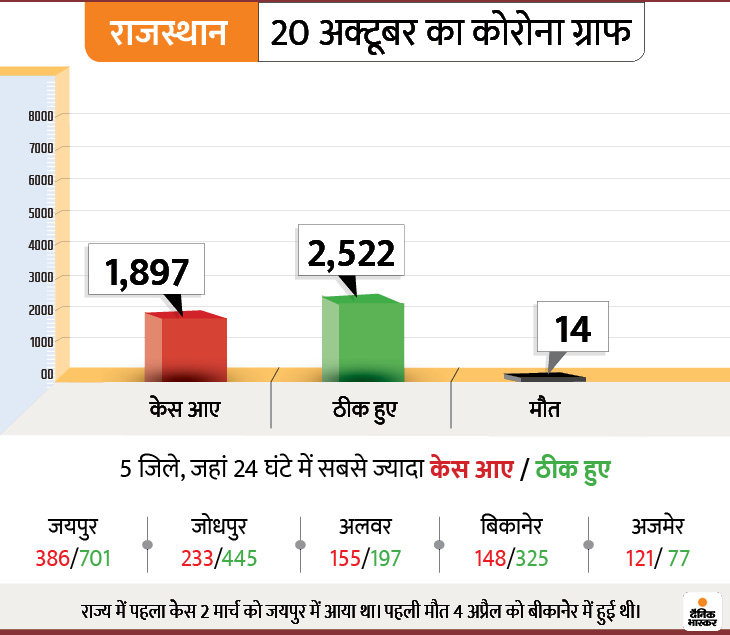 On Wednesday, 1277 new patients were found in the state and 1319 people were cured. 8 infected were killed. The number of patients has now increased to 2 lakh 8 thousand 238. Of these, 11 thousand 10 patients are being treated, while 1 lakh 96 thousand 208 people have been cured. So far 1019 infected have died due to infection. 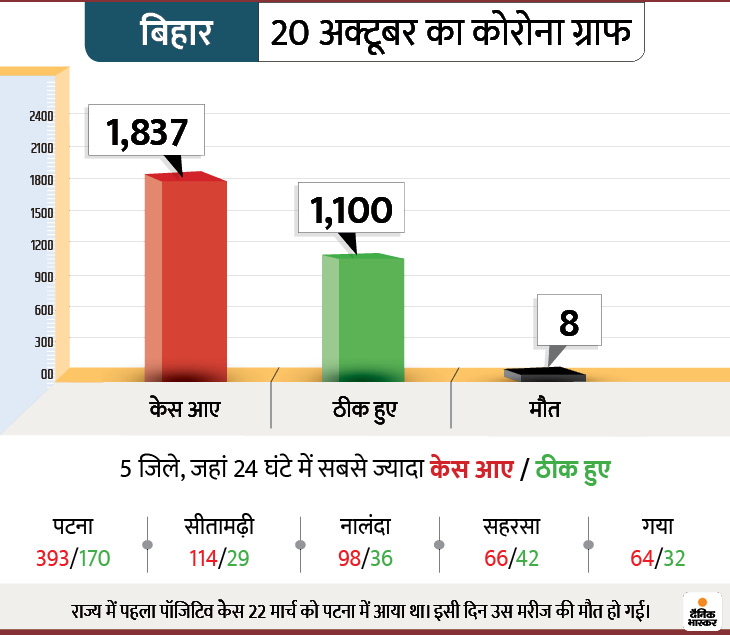 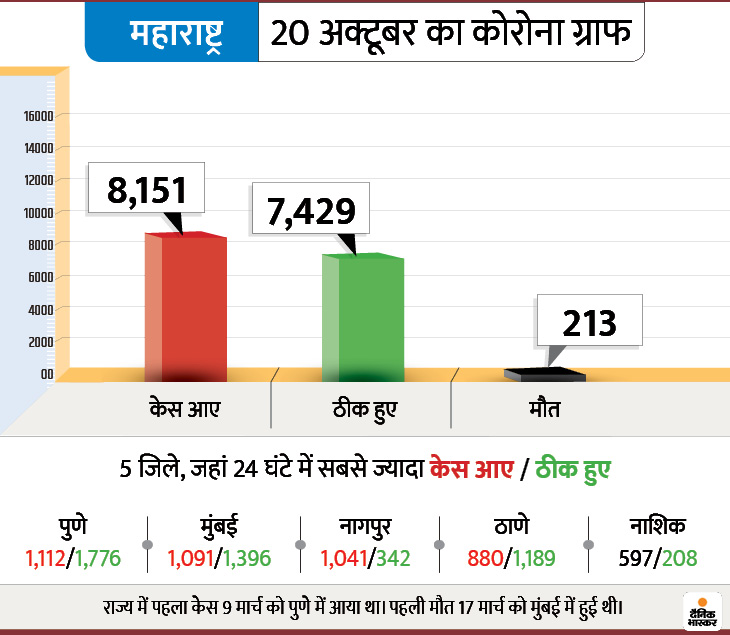 The figure of corona patients in the state has been 4 lakh 61 thousand 475 people. Within the last 24 hours, 2321 new cases were found and 3332 people recovered. 41 patients died. So far, 4 lakh 25 thousand 356 people have been recovered from the infection. Currently, 29 thousand 364 patients are under treatment. 6755 patients have died. 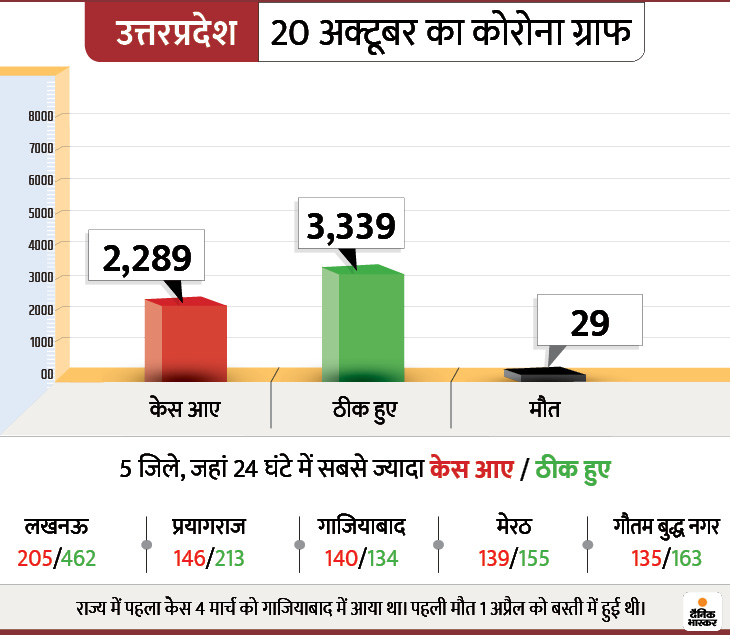 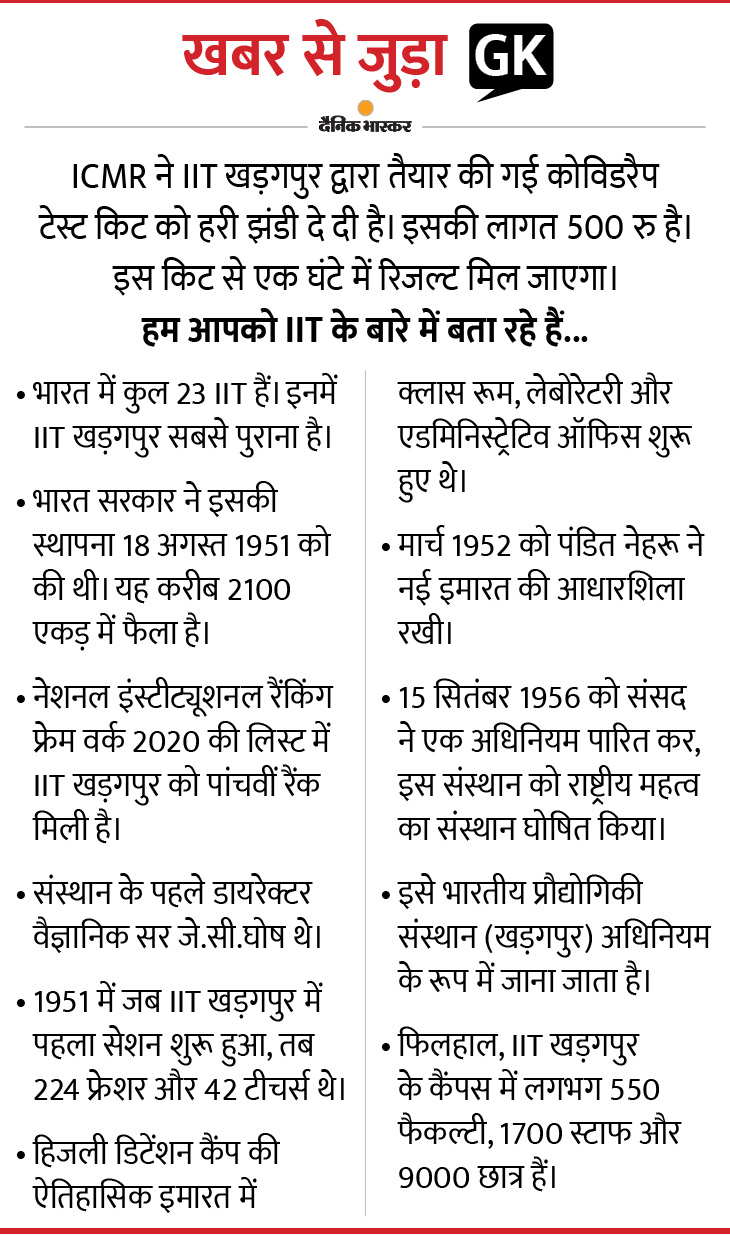 Recovery in India faster than top 5 infected countries; Health Minister said – Community transmission in some parts of the country; More than 75 lakh cases