Where are the Chinese Billionaires ?: Two months before the TV show finals went missing, there was a dispute with the Chinese President Jinping

Comments Off on Where are the Chinese Billionaires ?: Two months before the TV show finals went missing, there was a dispute with the Chinese President Jinping 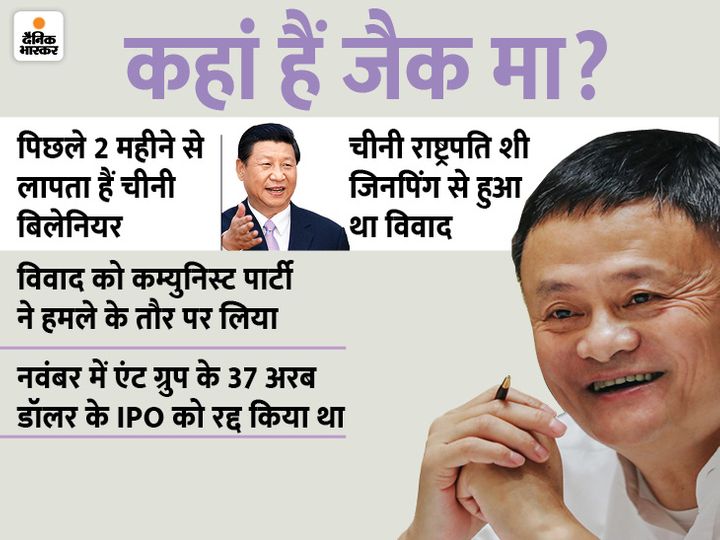 Alibaba Group owner Jack Ma, the world’s 25th richest man, has been missing for the last two months. Jack Ma had sharply criticized China’s ‘interest-bearing’ financial regulators and state-run banks in a speech in Shanghai in October. After which he also had a dispute with Chinese President Xi Jinping. It has not been seen since last two months.

According to the Bloomberg Billionaires Index, Alibaba Group owner Jack Ma is the 25th richest person in the world. His total assets are 50.6 billion dollars. Let us know that Alibaba Group is the largest e-commerce company in China.

Jack Ma had appealed to the Chinese government to make such a change in the system that does not try to suppress the effort to introduce new things in business. He called the global banking rules a ‘club of elders’. China’s ruling communist party erupted after this speech. Jack Ma’s criticism was taken as an attack on the Communist Party.

Strict action on Jinping’s order
In November 2020, Chinese authorities suspended a $ 37 billion IPO of their ANT group, giving a strong blow to Jack. According to a Wall Street Journal report, the order came from Chinese President Xi Jinping. Jack was then asked not to leave China until the ongoing investigation against his Alibaba Group was completed.

After this case, Jack mysteriously disappeared from the TV show ‘Africa Business Heroes’ just before the finals in November. Not only this, his picture was also removed from the show. The spokesperson of the Alibaba Group said that Jack Ma is no longer part of the panel of judges due to schedule dispute.

However, several weeks before the finale of the show, Jack Ma tweeted that he could not wait to meet all the contestants. There has been no posting from his Twitter account since then. Earlier, he used to tweet continuously. His last tweet was on 10 October.

We depend on Chinese apps for entertainment, data sharing, photo editing; Ticketlock, PubG, UC Browser to Zoom all Chinese